I’m so delighted to be featured in this promotional video for the 2014 Charleston Wine + Food Festival. This is the fourth year we’ve participated and it is one of the events we look forward to all year.

Charleston Food and Wine Festival takes place March 6-9… What an honor this was for me to be asked to be part of this production. The best however which I did not know was that my daughter,Lana, would be featured working in our booth. Please plan on attending this year’s event and be sure to come by and say hello to Lana and me at the Southern Season Open Air Artisan Market.

Danielle, The Growing Foodie, is hosting several opportunities for people to win a Gift Pack of Slatherin’ Sauce. Dani lives in the New York City area and shares her perspective on all things food on her blog.

She has developed several recipes featuring Slatherin’ Sauce. By commenting on any of these, you may win a gift pack. But you’ll also get some inspiration for some very creative ways to use Slatherin’ Sauce.

Dani has crafted this yummy looking Hawaiian Pizza Burger that makes me hungry just to look at it! Not only is she a great recipe developer, but a super photographer too. Thanks Dani for allowing us to share this preview with our readers. 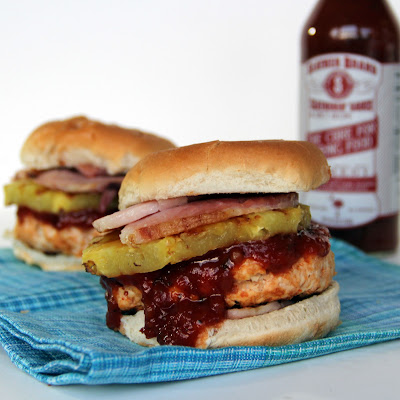 This is a guest post from Scott Lindenhurst at SauceAuthority.com. Thanks, Scott for sharing your review with our readers and website visitors. Click to read Scott’s review of Slatherin’ Sauce Original Recipe.

Too many times when you are looking for that perfect complement to your dinner, you are stuck with the same old hot or BBQ sauce that you have used and tasted a million times. It doesn’t even have to be the same brand, same style, same heat level. It can be a myriad of different sauces but chances are, if you are using the same category of sauce, you’ve had the same taste several times before with just a different label on it.

I host a website – SauceAuthority.com – where I have tasted and posted a ton of hot sauce reviews and BBQ sauce reviews. Many of them are ‘under the radar’ sauces, not just the typical ones you see at every restaurant or grocery store. So I’ve been able to taste many different sauces throughout my reviews. There have been the mild sauces that you can hardly tell anything has been added to them. There have been the hot sauces that you wonder why anyone would even put themselves through the pain of eating them. And there have even been BBQ sauces you’ve tasted that you felt like you have had them time and time again, just switching the labels on the front.

Then I came across Slather Brand sauce – in particular the Original Recipe – and it literally changed my taste buds and my views towards sauces instantly. Like I said, I have had my fair share of sauces and have rated them from low to decently high, but all bets were off the first time I tried this sauce.

Let me explain. This isn’t labeled as a hot sauce or BBQ sauce so it doesn’t fit the cookie-cutter mold of a ‘standard’ sauce. However, who said all sauces had to be the same? This sauce stands out from the rest in a unique fashion. It has a slight bit of kick to it which lends it to fall under the hot sauce umbrella. Yet the sweet taste to it has your taste buds thinking it should be classified as a BBQ sauce.

So what gives? Truthfully, I am not 100 percent sure where to classify it. I tried it initially with a burger and was floored by how good it tasted. And then that led to me pretty much using it with everything. But when people are over at the house and I am using it, I still don’t know what to call it. However, once I try to explain it for a few seconds and then just tell them to try it, they get what I’m saying.

Slather Brand Foods obviously did their research in what makes a great sauce, and the combination they came up with is a tremendous idea. They hit the target on this one, and they took the chance of going outside the norm to make a sauce that you can utilize on pretty much anything you come across.

I have tested a ton of different sauces and few, VERY FEW, have received the accolades that the Original Recipe by Slather Brand Foods has garnered. So regardless of whether you think it should be a hot sauce or a BBQ sauce, one thing is for sure – don’t go another meal without it. Slather up anything you have, it is that good. No reason to be bias, I tell it how it is. That’s the truth, that’s my word. And I bet you follow suit when it comes to Slather.

SauceAuthority is the home of the best reviews on BBQ Sauces, hot sauces, and Hot Sauce Recipes.

We’re pleased to be featured in the The Local Palate’s blog post. In case you haven’t heard of this delicious publication, the magazine is just over a year old. It is a wonderful compendium of articles, recipes, reviews, and insights into the food and beverages of our Southern region. You can count on the magazine to keep you informed of the best in culinary goodness emanating from The South.

Here at TLP, we have been taste testing bar-b-q sauces and think we may have found our favorite. Ever heard of Slather Brand Slatherin’ Sauce? If not, you need to get your hands on some ASAP!

We provided them with the recipe for our Original Slather Burger ®, our signature scrumptious hamburger, which Syndi thinks is just the ticket for Super Bowl eaters.  Read the entire blog post at The Local Palate, or get the recipe right here on our website.

We were delighted to learn that Slatherin’ Sauce is featured in “Weight Watchers 2012 Men’s Holiday Gift Guide, Gifts to help a man slim down, look great and live well.”  Weight Watchers’ staff introduced the product to their readers with the note, “The name alone invokes mouth-watering visions of smoky pit-barbecue chicken, ribs and steaks.”

We’re reproduced a part of the guide below and encourage you to view all the wonderful gifts selected for men by clicking the picture or the gift guide link in the preceding paragraph.

WishBoxUSA has launched in the UK. Both Original and Spicy varieties of Slatherin’ Sauce are offered through the online store. From our product demos there a couple of years ago, we know that our UK friends love the flavors of Slatherin’ Sauce and will soon be joining all our other fans in urging everyone to “Slather It On.”

Following a product test earlier this year at Charleston’s Costco, the store experienced strong demand for the Original Recipe Slatherin’ Sauce and requested a special size and package be produced for retail in Costco in Charleston.

In 2013 similar tests will be conducted in Myrtle Beach and Wilmington, North Carolina to determine if Slatherin’ Sauce is to be sold in those locations.

Slatherin’ Sauce is also sold at many Charleston grocery stores and gourmet specialty shops in addition to sales in grocery and gourmet shops nationwide, in Canada and in Europe.

So many local gourmet food items are featured in Charleston Magazine’s Pack a Local Pantry photo feature “Haute Stuff”. We’re thrilled to be included in the assembly. Thanks to our friends at Charleston Magazine for including us.

Well, pardon us while we puff our collective chests out in pride. Gear Patrol, in an article by Jeremy Berger has recommended Slatherin’ Sauce as one of their 10 selected “off-the-shelf” sauces. The digital publication states that they are,

…a modern take on the men’s magazine, blending the core advantages of the best print publications — high quality, visually forward design and an engaging mix of tailored editorial content. Staffed by a dedicated team of intelligent and irreverent writers, each inspired by their own lifelong passions and dispatched across the world, Gear Patrol provides a daily mix of insights and in-depth features on its core tenets of adventure, gear and design.

Gear Patrol is one of the most popular male oriented digital publications with many reading the pub for insights into a whole host of guy gear from watches to iPad sleeves to electric motorcycles. Gear Patrol writes about cool stuff guys want.

Being part of such a superior coterie gives us a sizzle, just like a good steak on the grill. Thanks gentlemen for including Slatherin’ Sauce in your roundup. We’re delighted to be part of such an esteemed ensemble.

The event will offer attendees tastes of South Carolina made products. Not only will attendees get to taste these great products (including Slatherin’ Sauce) but they’ll enjoy music from Jim Sonefeld of Hootie and the Blowfish, Lunch Money and Melanie McMillian.

The concert is free with the donation of at least four canned goods. The flyer below provides details on the event and food donations. To register for the event, please click to go to the Local Happiness website.

We hope to see you there.